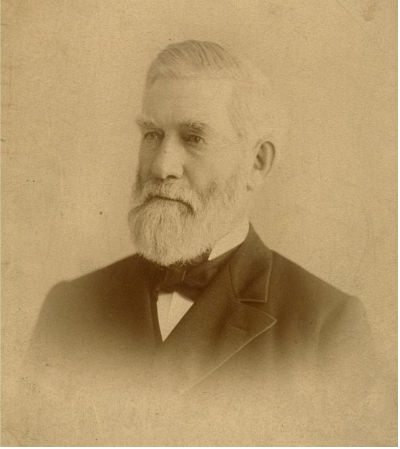 Welcome to Sacramento. It’s January 2020. You and the family are in town to see the Kings play. Your company has given you the tickets to the game and a night in the swanky Kimpton Sawyer. Sounds like an awesome night in Sacramento. Quick question. Who is Lorenzo Sawyer and why is your hotel named after him?

Lorenzo Sawyer was born on a farm in Le Roy, New York on May 23, 1820. He was the eldest of six children. In 1837, at the age of 17, he left the farm and pursued higher education in the field of law. He devoted the next eight years preparing for the bar. First in New York then in Ohio. In 1840 Sawyer emigrated to Ohio where he enrolled in Western Reserve College, and afterward continued studying at Columbus and Ohio Central College, graduating in 1846. He was admitted to the bar of the Supreme Court of Ohio in May 1846. He afterward went to Chicago, Illinois, where he passed a year in the office of future California Senator James A. McDougall (Like many Americans, McDougall was drawn to Gold Rush California in 1849; he resumed his law practice and was elected second attorney general for the new state of California). Soon afterward he entered into a law partnership with the Lieutenant-Governor John Edwin Holmes at Jefferson, Wisconsin, where he was rapidly acquiring an extensive and lucrative practice, when the California Gold Rush happened.

Joining a company of men from Wisconsin, Sawyer made his way across the country in seventy-two days, “an unprecedentedly short trip.” The group arrived mid-July 1850. He wrote sketches of this trip, which were published in the Ohio Observer, and copied into many of the western papers. They were highly appreciated and were used as a guide by many emigrants of the succeeding year. After working in the mines for a short time, he went to Sacramento and opened a law office there. Ill health, however, compelled him to seek the climate of the mountains, and accordingly he moved to Nevada City and entered upon the practice of law in October of that year. With the exception of a few months from February to August 1851 passed in San Francisco, during which time his office was twice burned, he remained in Nevada City until the autumn of 1853, when he returned to San Francisco. In 1853 he was elected City Attorney as a nominee of the Whig Party. In September 1854, he was again nominated for City Attorney by the Whig and American Party, or Know Nothings.

In 1855, Sawyer was a candidate for Justice of the Supreme Court, and came within six votes of reaching the nomination. On March 6, 1861, he was admitted to the bar of the Supreme Court of the United States. Upon the reorganization of the State courts, under the amended constitution, Judge Sawyer was, in 1863, elected a justice of the Supreme Court of California, and drew a six-year term, during the last two years of which he was Chief Justice. During his term, he was noted for the thoroughness and elaborateness of his decisions and held in high regard. Sawyer was nominated by President Ulysses S. Grant on December 8, 1869, to the United States Circuit Courts for the Ninth Circuit, to a new seat authorized by 16 Stat. 44. He was confirmed by the United States Senate on January 10, 1870, and received his commission on the same day.

As Sawyer was making a name for himself, a group of angry farmers formed the Anti-Debris Association in 1878. It was in response to the fact that hydraulic mining on the upper Yuba River and Feather River watersheds dropped debris such as gravel, silt, and other mine tailings into the rivers. This debris raised the riverbeds so high that the Yuba River spilled out into a two-miles-wide, 20-feet-deep flow. As a result, the Yuba River overran hundreds of thousands of acres of orchards and pastures and (repeatedly from the late 1860s, and especially in 1875) buried the entire city of Marysville and much of what is now Yuba City in as much as 25 feet of muck. The bed of the Feather River was also raised substantially, which caused it to flood Sacramento repeatedly and has rendered it unnavigable, except by very small boats, to this day. At the time the Anti-Debris Association was formed, mining law in California was quite localized and relied on decisions of the mining towns’ inhabitants. The inhabitants of the mining towns cared more about their own ability to mine for gold than about downstream residents’ ability not to be buried in 25 feet of muck, so they chose to continue hydraulic mining regardless of the damage caused downstream.

Judge Lorenzo Sawyer, a Ninth Circuit Judge, and ironically, a former miner who came to California during the early gold rush, was assigned the case. He held a reputation for being a fair and thorough judge — a reputation he upheld in taking two years to investigate the abuses claimed by farmers. During the case, Sawyer made multiple trips to the mining sites in question, conducting interviews with both farmers and the miners. He also surveyed the sites and the surrounding ecosystems to gain a better understanding of the full implications of mining.

In court, several witnesses testified against the mining company, including the Southern Pacific Railway Company who feared consequences from hydraulic mining would eventually negatively impact the railroad’s infrastructure and influence. Mining had already restricted shipping and steamboat activity in the Sacramento Valley due to elevated river beds; the wealthy Southern Pacific voiced similar concerns. In court, photographs by John Todd were used by Woodruff’s legal team to defend the rights of the farmers. Todd’s photos showed the destruction caused by the mining and documented North Bloomfield’s lack of precautions to limit flooding. Due to strong support for the farmers in the valley, few testified in the miner’s defense other than the company. There is consequently very little written about the miner’s efforts.

After two years, Sawyer made his final verdict public on January 7, 1884, his decision reaching 225 pages. Sawyer concluded that the mining operations not only were harmful to farmers, but also to state-funded infrastructure and California citizens. As a result, Sawyer ruled that mining companies could no longer dump debris in waterways. While this did not stop hydraulic mining or make it illegal, it did severely limit the impact the actions of the mining monopolies, at least on paper.

After, what became known as, the Sawyer Decision, the Anti-Debris Association continued to maintain an active role in enforcement and pushing for further legislation. North Bloomfield Mining and Gravel Company continued to mine at Malakoff Diggins after the Sawyer Decision, although to a much lesser extent. In 1886, the operations that continued were found to be in violation of the Sawyer Act; miners had been continuing to dump their waste into local waterways. As a result, the company had to pay hefty fines and was required to change its operations process, once again reducing their profit margin. Continuing Sawyer’s legacy, the Caminetti Law, passed by Congress in 1893, further limiting mining and requiring that all hydraulic mining operations hold a license. North Bloomfield Mining and Gravel Company decided not to comply and was later fined. At this time, due to the heavy regulations and restrictions, many other smaller mining companies closed nearby and moved their businesses to Colorado, the Dakotas, and Alaska were few regulations existed. Malakoff Diggins remained one of the last hydraulic mining operations until it closed in 1910. It became a California State Historic Park in 1965.

While Sawyer’s decision is widely considered to be California’s first environmental law, the overall effectiveness of the act was questionable. Yet, it did place regulations on industry and set a precedent for years and laws to come. While the law is considered to be an important piece of environmental legislation, the success of the farmers resulted in California’s changing status as an agricultural empire, particularly within the wheat industry. The lawless nature of the gold rush had lost its attractiveness and, in its place, California was creating a new, modern image based on wheat and other cash crops. A fertile valley, low elevations, sunny weather, moderate temperatures, and the confluence of local rivers for irrigation purposes all allowed the Central Valley to prosper as an agricultural center, promising more profit than the gold rush. Yet, the mining industry still stood in the way. Sawyer recognized the impact that the old industry could have on California’s new economy, therefore, deciding that, in this case, governmental regulation was the best way to protect the rights of private ownership in agriculture from large-scale monopolies.

This history report was sourced from multiple wikipedia entries about Lorenzo Sawyer and the Sawyer Decision. Presented by Steven “The Natural” Armstrong ECV.