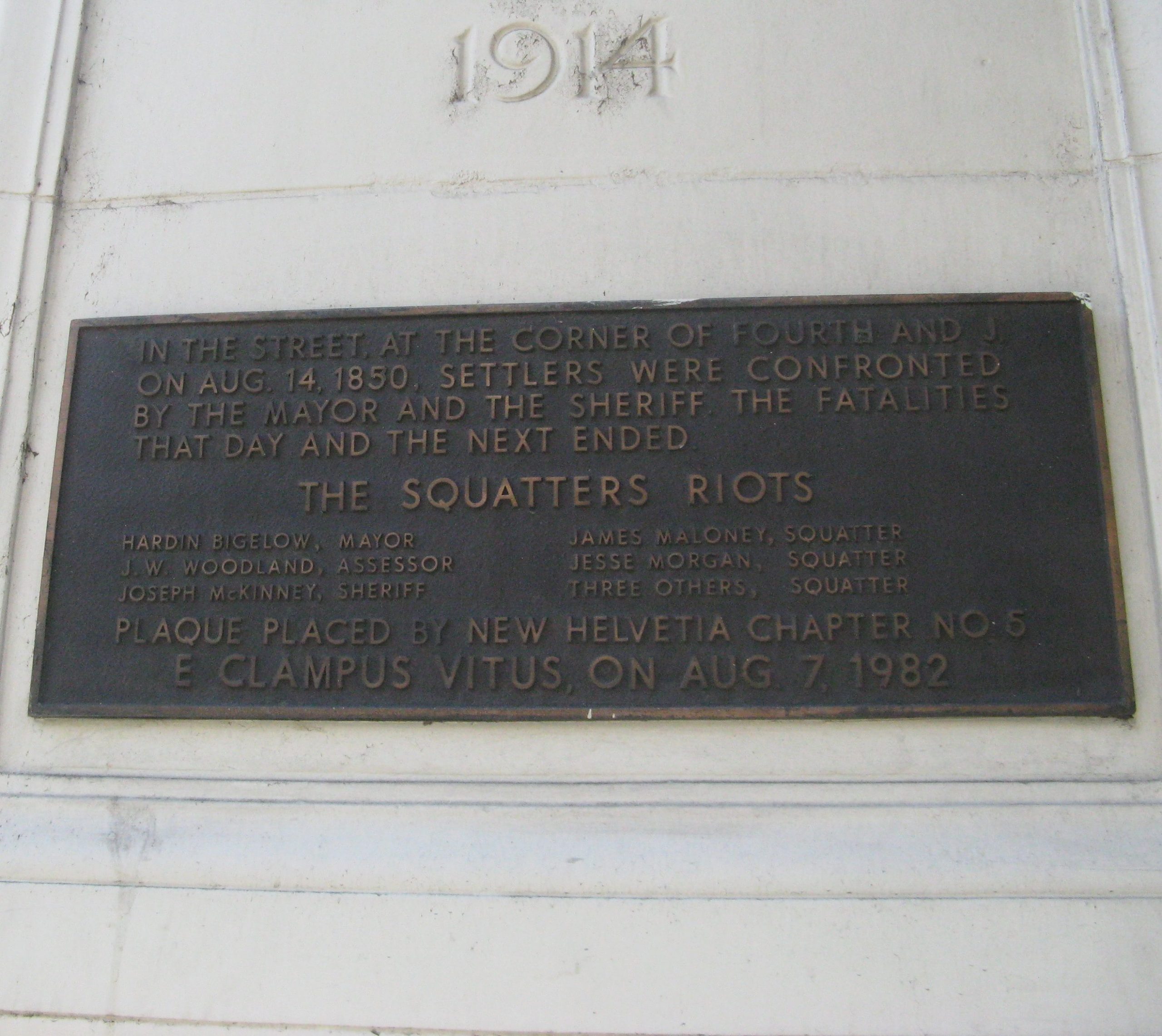 “There’s Gold in them Thar Hills” was the cry that brought thousands of illegal aliens to New Helvetia. Though not technically Illegal Aliens due to the Treaty of Guadalupe Hildalgo in February of 1848 (end of the Mexican American War), John A Sutter Sr. none the less considered them to be marauding, shiftless illegals.

In 1848 John August Sutter Jr. moved to New Helvetia to help his father, who once again was in financial straits. This did make some sense as John Jr. was schooled in counting, or as we know it today “Accounting”. By late 1848 John Sutter Sr. was completely disillusioned with New Helvetia as it had been totally over run with loiterers and drunkards.  John the Sr. deeded his son John Jr. a large tract of land near the confluence of the American and Sacramento Rivers and with that told John Jr. Fuckenze dis schite and headed for Coloma to start a business selling supplies to the Illegals, I mean Gold Prospectors, that had over run the area.

Mean while John Jr. was thinking of ways to make money to pay off his father’s debts. He considered selling his newly deeded land, the whole kit and caboodle, but the prospect of selling such a large chunk of land did not seem possible. He thought about selling off pieces of the land and decided he would call it Sacramento City which was not pleasing to John the senior as he wanted to start a town named Sutterville. Shit happens.

It was about this time that the Despicable Sam Brannan and a few other businessmen approached John Junior with a plan to buy his land, can’t lose they said. Junior hired William Tecumsah Sherman and Sam Brannan to help lay out a platte for the city and began selling lots. We’ll go more into John A Sutter Jr. in a subsequent history report, suffice it to say Junior got totally Fucked in the deal.

And this sets up the stage for the “Squatters Riots of 1850”. Settlers who arrived in the area found it difficult to find unclaimed land. Only 800 people held deeds to over 14 million acres of claimed land in California, and they weren’t selling cheap.

Most of the arrivals to the area could not afford lodging in New Helvetia or Sacramento City, so they just squatted on the lands surrounding Sutters Fort and began building their own cabins and shacks. Some Squatters even challenged the right that John A Sutter the senior had to the land from the Mexican Era Claim, they took him to court.

Prelude to the Conflicts

The Squatters were first roused into action by a lawsuit filed in Oct 1849 against a logger named Z.M. Chapman, he built a cabin close to Sutters Fort on land claimed by the Priest and Lee Company. As it turned Priest and Lee couldn’t prove they actually owned the land so the suit was dropped. This lead Chapman to extend his claim, there-by challenging Sutter’s original grants and subsequently all City owned lands. Dr. Charles L. Robinson, new to the area himself liked what Chapman was doing and built his own digs on somebody else’s land. Robinson helped organize the “Sacramento City Settlers” group and became it’s defacto leader.

In Late 1849 landowners of the area, headed by none other than our old buddy the Dispicable Sam Brannan, convinced the Sacramento City Council to issue a decree permitting the destruction of Robinsons property. Well, GOD said Up Bucket you assholes, I don’t like any of you! And in January of 1850 sent a humongous storm, it rained like the Billy for weeks. As a result most of Sacramento City was washed away including most all of the squatter shacks.

With the city being a giant mud pit, the majority of the squatters decided to do what they originally came for, go out and pick up all that gold that was just lying around for the taking. Off to the hills they went! Not long after a majority of the squatters found out that looking for gold wasn’t as easy as it seemed from all the news paper articles they had read in the east, so they returned to Sacramento City.

The newly returned squatters wanted the city government to recognize “Squatters Rights” and started holding public meetings and gatherings in the spring of 1850. They swore to defend their lands and formed the “Law and Order Association” along with an Irregular Militia. The Squatters and the Speculators, led by that no good despicable Sam Brannan, soon squared off. Shit started to get stinky after the Speculators destroyed a fence put up by a Squatter.

John Madden, squatter and later head coach for the Oakland Radiers was arrested on charges of “unlawful occupation” and found guilty on August 8th 1850. The Squatters thought this unfair and distributed hand bills accusing the Speculators of “Brute Force”. Doc Robinson started working with a journalist, James McClatchy (later he started and edited the Sacramento Bee) and together they founded a news paper called the “Settlers and Miners Tribune”. They promptly started throwing shit at the Speculators as they were impeding immigration to the City. At the same time Doc Robinson enlisted (drafted) Joseph Maloney to head the Settlers Militia in case any military action was required. On August the 12th Mayor Hardin Bigelow promised not to screw with the Squatters.

Of course Mayor Bigelow, being a true Politian, lied and on August 13th 1850 issued a writ of restitution to the place where John Madden, who lost the Squatters wrap, lived prior to his arrest. The writ called for the arrest of James McClatchy and Richard Moran, another Free Soil advocate. Both men were rounded up and jailed on the ship La Grange which was used as the Sacramento City hoosegow. Bing Maloney, head of the golf course, no wait, James Maloney head of the militia and Doc Robinson called on their troops to free Maddens land from the government. And this set the stage for the Squatters Riots of 1850.

Hardin Bigelow hearing of the Squatters Militia on the march incorrectly assumed that they were heading for the shitty ship La Grange to bust out McClatchy and Moran. Bigelow called his troops and marched off to confront the Squatters marauding Militia.

On August 14th 1850 the two groups met at the corner of 4th and J streets. Hardin Bigelow called for the Squatters to stand down and relinquish their weapons. Then the shooting began. Don’t know who shot first, but in the aftermath, both Hardin Bigelow and Dr. Charles Robinson were severely wounded.  The City Assessor J.W. Woodland and Joseph Maloney, head of the Squatters Militia were killed along with two spectators who were watching the events unfold.

General Albert Winn, head of the City Council ordered 500 militiamen towards the city and declared Marshall Law until the matter at hand could be resolved. The next day Sherriff Joseph McKinney led a party of 20 to find the Squatter James Allen who was involved, by some accounts, in the action of the previous day. They left Sacramento City and headed towards “Brighton” and found Allen in his cabin. The Sherriff went inside and ordered the Squatters to surrender, he was answered with gunfire and staggered out of the adobe and died at the entrance of the cabin. By the time it was all over the Sherriff was dead along with Allens brother and two other squatters. The remaining squatters surrendered and for the most part the ordeal wound down and ended. James Allen, subject of the search escaped the melee and was never seen again.

Hardin Bigelow as a result of his wounds and the cholera epidemic of October 1850 resigned his position as Mayor and moved to San Francisco were he passed in November of 1850. Dr. Charles L. Robinson still a popular figure in the community was elected to the State Senate while he was still in prison awaiting trial for murder. He was subsequently discharged without trial and served as a State Senator from 1851 through 1852. He later moved to Kansas and became the 1st Governor of the newly admitted state in 1861. He also became the only Governor of the state to be impeached. The charges were unfounded and he was found not guilty at trial. Later he became a State Senator of Kansas from 1873 to 1881.

There is a plaque at 4th and Jst, set in 1982 by our past brothers of New Helvetia Chapter 5 E Clampus Vitus® commemorating the events of the Squatters Riots.

This tale has been stolen from many unreliable and disreputable sources, including the internet and “Brighton: Who Shot The Sherriff” by Bill George current President of the Sacramento Historical Society.

With Regards to All Brothers of Equal Indignity 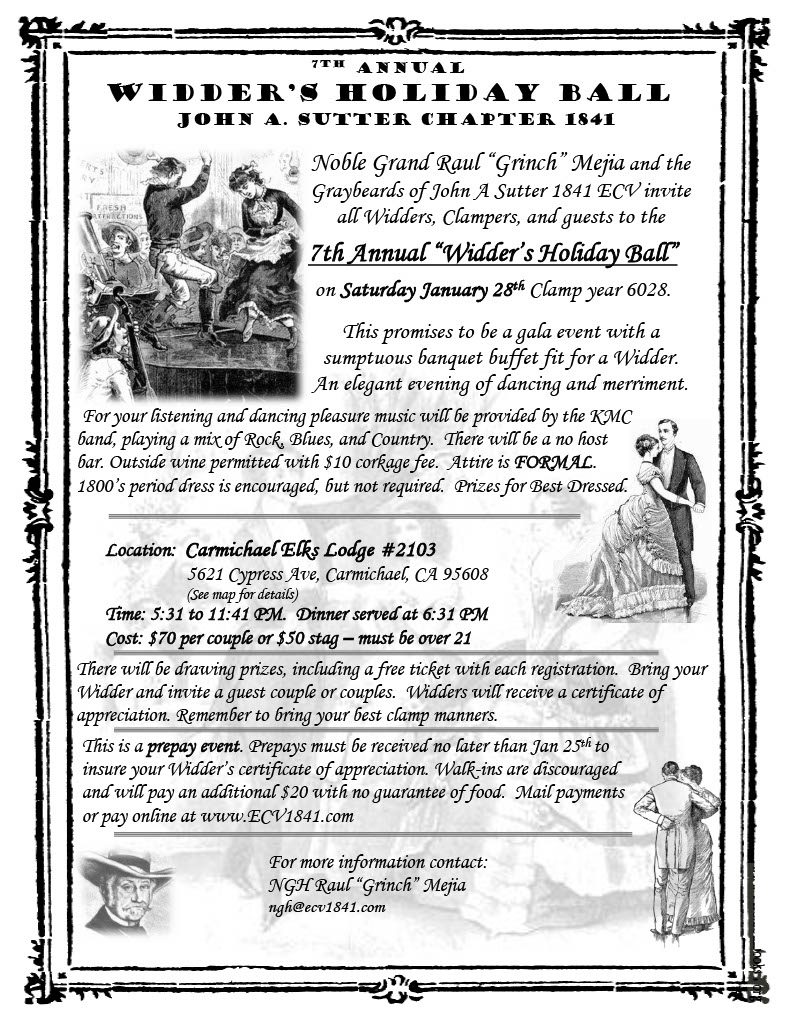