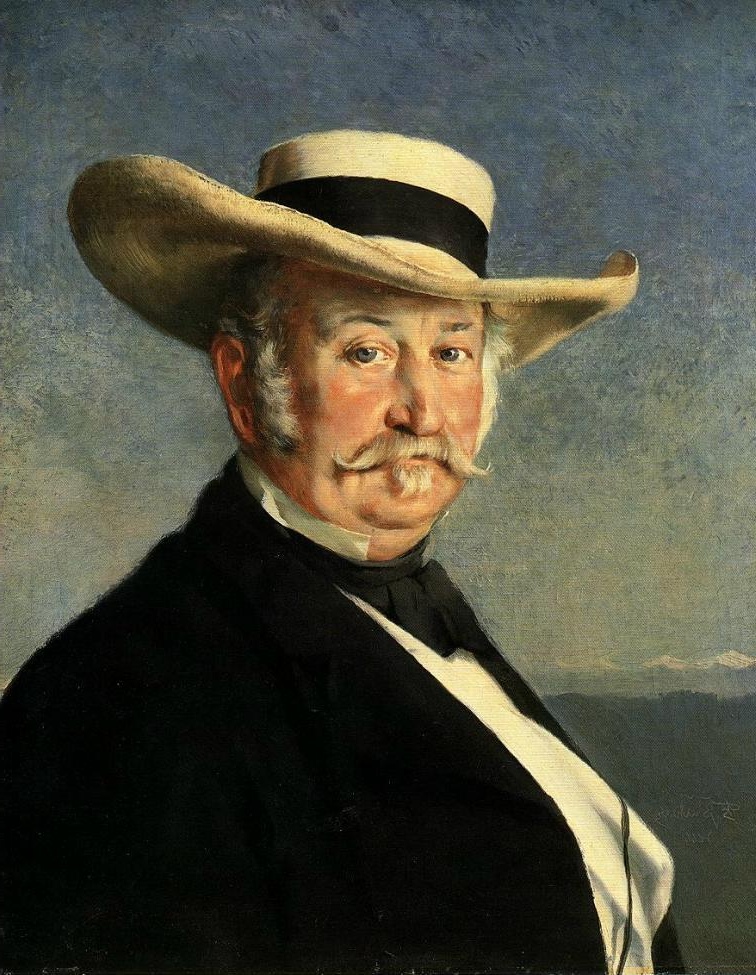 John A Sutter, born Johann August Sutter In 1803 In Kandern, Baden Germany, close to the Swiss Border. His Swiss father was a printer by trade. Sutter apprenticed  in the printing  trade, attended a military school and spoke four languages. At 21 John Sutter married Annette D’beld a Swiss girl from a well off family. Sutter married up! He opened a drapery shop and managed to go through most of his wife’s money in a few short years and had to come up with a suitable plan to escape a prison term for being a debtor.  His plan was simple, put his brother in charge of the wife and family and haul ass for the New World. This he did in 1834, leaving behind a wife and four children.

Sutter traveled to the New world from Le Harve France using  a French Passport to New York City. After arriving Sutter traveled to the St Louis area and worked for a few years as a merchant and inn keeper. It was during this time the he got the idea to be an agricultural giant. Having heard about good land being available in the west he set about making plans to head to Califia later to be known as California. Setting out from Missouri in April of 1838 with a group of trappers and mountain men Sutter eventually ended up at Fort Vancouver, the end of the Oregon trail. He was anxious to head to Califia, but was cautioned against the overland  trip as it was to dangerous in the winter and the Nez Pierce Indians weren’t all that friendly. So he did the next best thing, he borrowed more money and got passage on board the ship Columbia bound for the Sandwich Islands, today known as the Hawaiian Islands.  He had plans to sail from Hawaii to California, but the only ship going the way had already sailed by the time Sutter arrived.

It was in Hawaii that John A Sutter presented himself as a Captain in the Swiss Guard along with letters of introduction he had managed to acquire on his journey. While staying in Hawaii Sutter managed to convince some businessmen to invest in his Agricultural ideas and establish a mercantile presents in California. He must have been, if nothing else, a good “bullshitter” . After four months he left Hawaii with ten Kanakas (Native Hawaiians). Sutter signed on to the brig Clementine to carry goods to New Archangel (Sitka Alaska), Sutter would travel as the Super Cargo on that voyage. He departed Hawaii on April 1839 and arrived in New Archangel a while later. While in New Archangel he became friends with the Russian Governor Kupreanof   who helped Sutter with several details as well as letting him use the Ship Clementine to sail to California to drop supplies off at Fort Ross and Yerba Buena, which Sutter did before sailing to Monterey to declare his cargo.

Sutter arrives in Monterey to talk with Governor Alvarado in late August of 1839. At first the Mexican Governor is not very enthusiastic about Sutters idea of a land grant, stating that all the land was already taken and that any remaining lands would go to family members. The Governor changed his mind once he learned that Sutter did not want any of the coastal lands, he wanted the interior. He wanted the “El Sobrante” or left over land. This presented the Governor with a solution to two possible problems. 1st there was no establishment in the interior as the Indian population controlled the area and two if there were a presents in the interior he might be able to keep the Americans out of the territory. So with that line of thinking prevailing, the Governor told Sutter that he would be granted land based on two conditions, one he had to become a Mexican Citizen and two that after one year as a citizen and if Sutter were successful he would be officially granted the almost 50,000 acres of land (75 SQ miles). Sutter got his citizenship on Aug 20 1840 and was officially granted land title in Aug of 1841.

After concluding business in Monterey Sutter sails back to Yerba Buena (San Francisco) and hires the schooner Isabella and two smaller vessels to transport his provisions and supplies up the river. fter two weeks the Sutter flotilla arrives at the confluence of the Sacramento River and the American River as it is now known. Here Sutter decides to use this area as his new territory which he names for his old home Helvetia. The new land is now known as “New Helvetia”. It is recorded that about 200 Indians watched Sutter and 12 others come ashore that day, ten Kanakas and two German sailors. The Indians must have found it curious that a white man was traveling with people that looked like them, of course they were looking at the Kanakas. In any event the natives did not attack Sutter or his group. Sutter promptly put up his tents and had a few brush huts built. This was the beginning of Sutters Fort.

Sutters Fort was well underway by 1840, and Sutter needed to attract settlers to the area so his dream of running an agricultural and mercantile center could manifest itself. He began advertising in Eastern publications that he would provide land and the start up for ranches to anyone who was interested. In 1841 John Bidwell arrived and began working for Sutter in various positions. One thing that Bidwell instilled in Sutter was that the people back east were afraid of the Indians and that Sutter needed to show that they would be safe in California. Bidwell suggested walling in the fort and once that was done the people would come to a safe place. It is also important to mention that about that time not only was the fort coming along, but it also had its first distillery.

1841 was also an important year for Sutter as he managed to purchase Fort Ross and Bodega Bay from the Russians for $32,000 which he got by mortgaging New Helvetia. He also established the Hock Farm just south of what today is known as Yuba City.

Sutters Fort was pretty much completed by 1844 and it grew in importance as the destination for westword travelers, all trails, paths and what would become roads lead to Sutters Fort.

1846 turns out to be a busy year for Sutter. On June 14th 1846 The Bear Flag Revolt took place wresting power from the Mexicans and Declaring California a “Lone Star State”. Thus giving the Americans the upper hand, some three weeks later the United States concluded its war with Mexico and all the western territories came under US jurisdiction and John Sutter was given the title of Lieutenant in the United States Army.  At the same time the west was becoming a popular destination for those seeking a new, better life. The wagon trains from the east were literally a non stop line from Missouri to Sutters Fort. All this was good news for Sutter as his plan for creating an agricultural empire was coming to fruition.   He by now had some 13,000 head of cattle and horses, and was growing enough produce to satisfy the needs of the area. In short he was becoming successful. Later on the ill-fated Donner Party decided to spend the night near what is now Donner Lake. That didn’t work out so well for them and John Sutter was once again called upon to help out. He did, sending food supplies and men to the aid of the Donner Party. In February of 1847 47 of the 87 people of the Donner Party were rescued and taken to Sutters Fort where Sutter granted them permission to stay until they were once again well.

1847 turns out to be another monumental year for Sutter if for no other reason than his hiring of James W. Marshall. Sutter hired Marshall to oversee and build a sawmill on the American River by Coloma. Sutter needed the lumber for selling to all the new folks arriving in California. On January 24th 1848 while Marshall was inspecting the tail race for the mill he spotted what he thought might be gold. He took this to Sutter and at the fort, in a private room, he and Sutter preformed test on the material to see if it was indeed gold. It was. Sutter wanted to keep this information under wraps and swore Marshall to secrecy. Sutter also told his friend and co-worker Sam Brannan about the discovery and Sam Brannan promptly published the gold finding in his newspaper. And this was the start of the California Gold Rush.

John Sutter had sent for his eldest son to come help him manage the Fort in early 1848.  John Sutter Jr. arrived in September 1848 just in time to see his fathers legacy begin to crumble and Junior was immediately inundated by John Sutter’s creditors.

By 1849 the human stampede had begun in earnest. Gold seekers where everywhere. Thousand and thousands of people were on the move to California pushing law and order before them. They arrived in California with very little and only wanted to get to the diggin’s and find the yellow flake. In the process they destroyed Sutters crops or took what they wanted, rustled his cattle and horses  and paid no attention to John Sutters holdings.  From this point Sutter tried to become a merchant to the miners, but his business partners cheated him and his creditors pursued him. John Jr. along with Peter Burnet (first Governor of California) and William Tecumsa Sherman laid out the grid for what John Jr. called Sacramento and they began selling land parcels to get money for John Sutters creditors.

By the end of 1849 Captain John A Sutter had given up on Sutters Fort. He sold it in late 1849 or early 1850 to Alden Bayly for $7000. Sutter had sent for his wife and children and when they arrived John Sutter moved to his Hock Farm to continue to grow food and ranch cattle.

By 1857 Sutters Fort was almost gone. Much of the bricks used to build the structure had been removed and used on other buildings in Sacramento. All that remained of the Fort was the main building and it was in poor shape. Sutter continued to live at Hock Farm until 1865 when a disgruntled employee burnt the place to the ground.  Sutter decided to try to obtain restitution ($50,000) from the US government for his help in colonizing the west and California. In 1871 Sutter and his family, with the exception of John Jr., moved to Lititz Pennsylvania.

June 18th of 1880 Captain John A Sutter passed away without having ever realized his over all goals. His wife passed away early January 1881.

I have not mentioned the Indigenous Indians much, but it should be noted that Sutter did use the Indians to build his fort as well as to tend his lands and crops. Sutter did pay the Indians, he generally went to the tribal head (Chief) and settled with him as to how many he would need and the amount to be paid. Most trades were no doubt in material goods, knives, cooking pots, fabric ect.